The Horses are Cuckoo; It Must be Spring

Spring is well advanced in my part of the country, so much so that everything is blooming 3-4 weeks ahead of when it normally does. Lilacs in April? Sheesh! But the grass has been slow (everywhere but my yard), so the horses are hanging impatiently over the gates staring longingly at the pasture. I can feel them from here, this subliminal "I want out, I want out, I want out. Now!" sort of deal. They are manifesting their displeasure in brattiness on the lunge line and inattention under saddle, the usual spring nuttiness.

Fortunately, it only last a few days in that transition from winter sloth to "You want me to work?!" I wonder if, back on the medieval farm, the plow horses that had been happily eating their heads off all winter with nothing much to do ever gave a big "woo-hoo!" and took off bucking when hitched up for the first time in the spring. It would be a fun scene in a novel, a nice distraction when the hero needs it, or a chance for a down-on-his-luck farmhand to ingratiate himself into the farmer's household by catching the rambunctious beasts.

One thing to remember when turning the horses out, especially if it's for the first time in the spring. Step back. Way back. As in, get the heck out of their way, and not just because you might get run over in the stampede. Watch out for the exuberant high heels as they let fly with a buck or six on their way out through the gate. It feels soooo good to run and run after a winter cooped up in a safe stall or paddock. Often the enclosure is frozen in ruts where the churned mud has congealed iron hard. Sometimes there is packed snow and ice that forces the poor ponies to pussyfoot along in their restricted rounds. Very often the horse poop freezes in immovable piles before you can clean the place, which is like walking on round, unforgiving river rocks. For all those reasons, the horses can't wait to get out into the big pasture and go for it. So watch out, as they have no qualms about kicking you in the head on their way past.

And here's your bit of horse trivia for the day: the equine digestive system manufactures different bacteria to break down dry hay or green grass. That takes a few days, which is why when a horse is turned out cold-turkey after a winter on hay you are likely to be dealing with slimy green trails down his hind legs for days. We called that "scours" when I was a kid and it was just a fact of life every spring when the horses went out. The way to prevent it is to transition them gradually from hay to grass by turning them out for a couple of hours a day while continuing to feed the dry stuff in smaller and smaller quantities. I wonder how many savvy old farmers figured that out on their own?

Well...I was about to go out and play in the sunshine, but it's disappeared! It's pouring out there, doubtless related to that roll of thunder I heard a while ago. Must be spring!

Labels: horses in fiction, horses in spring, S. A. Bolich

On Prologues and POVs 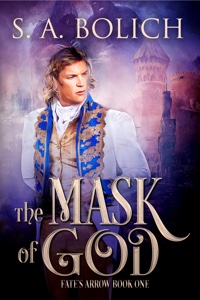 I've been busy the past couple of months with conventions, prepping for Radcon and Norwescon and recovering from them afterward. They're so much fun, but a bit exhausting. I did, however, particularly enjoy a couple of panels I was on, and thought I'd combine some thoughts sparked by them into one post. And celebrate the new cover of The Mask of God from the fabulous artist, Fiona Jayde. Ain't it purty? We're redoing all of them because we had to change cover artists mid-stream the first time around. A series should look like a series! Watch for the re-dos of The Mark of God and The Heart of God coming soon, and the release of Book 4, The Wrath of God, in June.

Whenever writers get together there will always be an endless variety of opinions on "the rules" of writing. Everybody agrees the prose must be readable and the story engaging. After that. . . snort. Nobody agrees on anything. The subject du jour at Radcon was prologues and how they should be avoided like plague-carrying rats. Nobody reads them, say some. But if they're necessary to the story, put 'em in, say others. At Norwescon it was how shifting POVs are death. Or not. Can epic, multi-plot fantasies truly be written from one POV? The debate rages.

My personal opinion is that a writer can make anything work if they do it well. And I personally like prologues, especially in epics. In Mary Stewart's The Crystal Cave, the story starts before Merlin is even born, with a meeting of two people whose names we don't (yet) know. The scene seems irrelevant at first, but then she gradually reveals the meaning and we see that yes, this is indeed where the story starts, six years before we meet Merlin himself. Sometimes the author needs to go back thousands of years to lay the groundwork. Prologues are infinitely more interesting than trying to work all that backstory gracefully into the opening chapters, trust me. And so much easier.

Regarding POV shifting, otherwise known as head-hopping--eh, guilty as charged. I like to head-hop, because very often the Point of View character can't know everything the writer needs the reader to know for the story to make sense at any given moment. Carol Berg does single-POV, first person epics superbly, but I like to write in third-person, and to view a scene from multiple viewpoints when required. My Fate's Arrow series hops shamelessly from head to head, often in the same scene, because I as a reader like knowing what other characters are thinking, and it is often easier just to show the reader than try to awkwardly have the main character guess. So don't be surprised if you are suddenly looking through someone else's eyes on occasion, because it's not a mistake.

Now, how do I personally make these things work? I went through about four different versions of a prologue for The Mask of God, trying to lay the groundwork for this danged epic that was pouring from my head in such rich detail it was becoming a bar to getting the story off the ground. I learned a lot about the characters and the world but none of the early drafts were quite right.

This one was in the very first draft of the novel, which at that time had a working title of The King's Brother. So naturally we see the brothers who are the bedrock of the entire story. But beta readers wanted to know how that scene was relevant, so I scrapped it and tried again. In this one I wanted to show the very important backstory surrounding the colonists' rebellion against the theocracy that had conquered the planet and cut it off from the galaxy. And it was pretty cool and I learned a lot that made it into the books, but again, it wasn't quite right.

Finally, because there are two strong storylines involving both mortals and immortals, I started with the immortal who is really responsible for the whole darn thing. And thus we have the real opening to The Mask of God. Really!

You can read about the development of these various versions in more depth at my website here.

Enjoy! And if you're a writer struggling with "the rules," just write. Your beta readers will tell you if it's working or not. And have fun building your world!
Posted by Works of S. A. Bolich at 3:11 PM No comments: