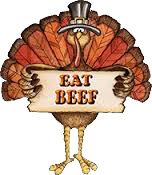 Ladies take heed and gentlemen take warning:
Things look quite different on Thanksgiving morning
Than they do by the end of that "relaxing" day.
So try sharing it *all* and keep the holiday gay!
Posted by Works of S. A. Bolich at 8:59 PM