Horses in Fiction: The Balky Horse

You know, there is nothing quite as frustrating as a horse that refuses to go where you want it to go. There you are, up on your high horse (literally), the lofty rider looking down at the foot-bound peasants, the master of this magnificent beast who must accede to your every whim... 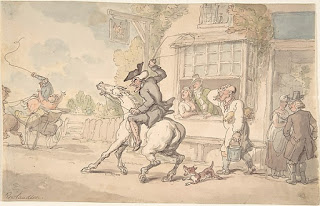 Sitting in the middle of the beast gives you precious few options when Horsey decides he ain't going where you want to go. Whip and spur are overrated in this regard. Very. Sheer brutality may force him to quivering obedience, but I have witnessed occasions when even that didn't work. Horsey has many options for not proceeding where you want him to go, and when he takes a mind to stick in his toes, getting him to move can be a right puzzle--and a marvelous plot bender.

Suppose your rider really, really needs to go "thataway"--and Horsey balks? This may be two steps from the stable or ten miles down a lonely road. It could be the only open path between enemies closing in, or a desperate dash for help for a wounded comrade. It could just be that your rider is trying to show off, and now Horsey's recalcitrance is proving to be a severe embarrassment. Any of these scenarios can derail the hero's (or villain's) best-laid plans, so I highly recommend a balky horse when you need diversion, delay, or general frustration in your story. And here is what it looks like in a fear (as opposed to disobedience) scenario:


Which brings us to the inspiration for this post today. Nellie's favorite resistance has long been balking, but I thought I had her completely through it until last month when she did it for the first time in years. Blame that one on too long a time off while I was in chemo. Being the universe's most herd-bound beast, she was anxious to get back to the barn, and I would not let her. Ergo, she planted herself (FACING the barn, mind you!) and took exception to my gentle leg urging her forward. No, we went sideways, back, and every direction but forward, which was actually the direction she wanted to go. This is simple disobedience, and the cure for her is simply to wait her out for a few minutes without letting her move sideways or back. So long as you don't pick a fight she will relax fairly quickly and accept a leg cue. At that point the trick is to keep her from charging back to the barn. We walk, quietly, and if we don't walk quietly we circle back and do it again until her mind is between my hands again and not in the barn.

For horses who choose to try and assert dominance this way, you can spend quite a long time forcing them to stand exactly where they stopped, not letting them turn away or back up, until they finally get bored enough to walk on. There is no need for swearing, whipping, or spurring. Patience is the answer to this one. Picking a fight just makes it worse by driving home the notion in the horse's head that any time they stop they will be beaten half to death. Don't. Just don't. Bring a book if you have to, but wait them out, because the first time they yield, you have won the war. You may have a skirmish or two afterward, but once they give it up the first time, they quickly figure out they have not actually died and the whole exercise becomes counterproductive from their point of view. And you have not installed a permanent fear memory in their heads.

Pilot, on the other hand, is scarily stupid when he takes it into his head that he's done going where I want to go. I rode him off the place today for the first time since last year, down the road into the canyon below my house. He was slightly weirded out by the strangers parked at the trailhead, but we got past that. He didn't like the new gate the State put across the road to block motorized access, but after two or three attempts to turn away and a little opportunity to gawk at it he relaxed and walked quietly around it. He went willingly a quarter mile or so down into the canyon, to a spot where they dumped white gravel over the road to fix a low spot. This is, naturally, right where it drops off sheer on one side and the bank goes straight up on the other. This is not a good place to pick a fight, and this is, of course, where he decided he was far enough away from home now. Bear in mind that this horse always sidles to the right when upset. Guess which side the drop is on? And it is nearly sheer, and a very long way to the bottom.

I do not like letting the horse win, but neither am I suicidal. He spun away and started leaping toward the edge in totally brainless style. I got him to sidepass to the bank and let him walk on. Small battle won, but yes, we were homeward bound at that point. He wanted to jig; I made him walk. Another small battle won. At the top where it widens out enough to be safe, I made him stop, and fought a few sidling battles there until he did. When we moved on it was at my will and he was obedient to both leg and hand. Yet another small battle won. We will leave the bigger one for the next time.

While I made sure not to instill in him a permanent association with that white gravel spot as a place to fear or fight, I have no doubt he has a notion that he can "win" by simply turning back there. Next time, if I have to, I will dismount and lead him past it. But I will not fight him through it, because in this instance it might be a Pyrrhic victory. Simply riding him away from home on a more regular basis will likely fix the problem painlessly. But if I were the heroine of a novel who really needed to go down that road, I'd be in a pickle, which is where your heroine should be all the time, no?

Balky horses are great plot devices, and even the most well-trained nag is subject to the malady under the right conditions. Smart riders listen to their well-broken horse when this happens, because you just never know. King Kong might really be lumbering up the other side of the hill.

If you like these posts, you can repay the time it takes to put them out by buying one of my books. "Out of the Vaults," a fun collection of stories set in the Museum of the Arcane, is 50% off this month at Smashwords. Use the coupon code on the page to get the discount at checkout. Thank you, and enjoy!
Posted by Works of S. A. Bolich at 1:21 PM