Of Flags and Symbols and How to Change Them 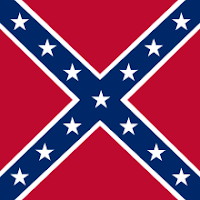 You know, I usually avoid political rants, but this whole business over the Confederate flag (more properly, the battle flag of the Army of Northern Virginia) is making me quietly crazy, and now I see that Amazon and eBay are patting themselves on the back for banning sales of it on their sites. Fine. They have that right. But I keep thinking about when I visited Gettysburg. It was a Memorial Day weekend, and I was walking up along the route of Pickett's Charge from the spot where Lee watched it. When I came to the wormrail fence that separates the lower half of the battlefield from the highway bisecting the field below Cemetery Ridge, lo and behold, there was a small group of kids, probably 10-12 years old, in the company of a park ranger. They were recreating the charge, bearing Lee's battle flag with them, doing their best to keep it flying. What struck me most was that they were so serious about what they were doing, complete to a little sergeant yelling at his troops to dress the line, to keep going, to keep the flag up. Somehow, the ranger had imbued them with the spirit of the thing, the life-and-death importance of the charge itself felt by the men who participated in it. They will remember that day for the rest of their lives. They were exposed to history in a fun and memorable way, something that can never happen in a world where "hateful" things are all banished out of sight and terribly correct lectures all stress how awful anyone who ever flew that flag must have been (or still be).

For millions of people the Confederate flag is about the courage it takes to stick to a cause, even a cause our modern eyes see as wrong. For others, the fact that it has flown over profoundly racist acts of violence makes it anathema. How do we get to the truth? Not by whisking it away out of sight. Sure, I would lean toward taking it down as a public symbol. Its heritage has simply become too tainted with modern sensibilities and distortions. But banishing it to the museum? Making it impossible to buy or sell? Banning it (as I'm sure a lot of the screamers would like) from public view altogether? BS, to put it bluntly. Depriving the many for the actions of the few is the first step on the road to totalitarianism.

If it becomes impossible to obtain the proper accouterments, shall Civil War recreators no longer teach the crowds who come to watch "how it really wuz," or share their profound love of history, often sparked by the fact that their ancestors fought in that war? Mine did, on both sides. Shall we no longer examine why they fought, and forget the hardship, heartbreak, and pain suffered by the combatants in a cause both sides believed in? Shall we not examine the roots of slavery and why anyone would fight for it in the first place, or why defeat spawned such bitter and lasting injustice as Jim Crow? Or why Reconstruction embedded that flag in the Southern psyche? Should we not study this symbol to understand the very psychology of American bigotry?

How can we understand the passions of our ancestors if we shove one side under the rug, or honor the sacrifices of the men who did fight and die to end slavery? How can we prevent another such war if we are too afraid even to honestly discuss the first one? This villification does nothing to advance the cause of eliminating racism, because guess what? When you take down that flag...the racism is still there. All the screaming will have stopped. The screamers will declare victory and move on to the next cause du jour. But the real haters will still be there. And the real victims will still feel that hate in myriad ways, with or without a flag being waved in their faces.

You can't eliminate a problem by covering up a problem. Shall teachers never unfold that flag in a classroom and have a thoughtful discussion about what it meant to the men who fought for it, or about what it means today, or how the meaning changed? Shall we forgot how far we've come because a few cretins use that flag as the living symbol of their own bigotry?

As usual, the passing bandwagon has collected a lot of people who really believe that screaming loudly and forcing people to take down a piece of cloth will actually fix racism. Out of sight, out of mind, right? Sorry, this is a band-aid on a much deeper problem. This isn't a hash tag on Twitter where you can click through and feel all warm and fuzzy for joining the current club. Did BringBackOurGirls actually bring back our girls? Did BlackLivesMatter actually change any minds, or just make people who already considered themselves enlightened feel good about themselves?

To root out the everyday reality of bigotry, you have to reach the real bigots, and taking away their flags isn't going to do it. This is a deep and endemic problem of perception and reality, which aren't always the same. It needs thoughtful discussion, not knee-jerk reactions. Yeah, it sounds good to hurl "racist" labels at people displaying that flag. And I would agree that not walking under state-sanctioned displays of it every day might help the black population of states that fly it feel more safe, more included. I applaud that. I do not applaud this unthought-out drive to make it disappear. Because flying it reminds us all where the America we know today came from, of a war fought to end injustice, of the constant struggle to not go back there, of the need to keep trying to heal the lingering wounds. The Confederate flag can be--should be--a living symbol of change. If we choose to make it so. If we quit screaming long enough. If we really want change.

Next time you see that flag, try stopping to consider what it doesn't mean: a country where human beings are held in bondage, blacks are counted as only 3/5 of a white person, and "free" only comes with a piece of paper if your skin is a certain color. Look at it flying below an American flag and realize that America won. The Confederate flag is the symbol of a defeated attempt to destroy the American experiment. Look at it and rediscover pride in the courage it took to stand up and fight to preserve not only the Union, but human dignity. See it and remember that defeating the Confederacy was just the beginning, and that we still have a very long way to go.

You really want to take the sting out of the Confederate flag? Try changing your own perceptions instead of demanding that other people change theirs. That's usually the first, essential step to effecting real change.
Posted by Works of S. A. Bolich at 9:10 PM

An excellent post, Sue. It's important not to throw out the baby with the bathwater, and it's important for people of many persuasions to feel proud of who they are. A flag is essentially an arrangement of pieces of cloth. It's what people see in it that gives it power. Many years ago a friend who travels internationally said that in the United States the flag is the main symbol of our patriotism; other countries have something else. To deal with bigotry one would have to sit down with a bigoted individual and explore the roots of who they are and what they hope to accomplish with it. And this could also mean exploring one's own secretive, maybe not-so-nice corners as well--a difficult and painful process.

Thank you, Christie. I see many people saying things like "Let 'em wear it so I can tell who to avoid" and it makes me sad. It seems to me that people who say stuff like that are clinging to their own sense of righteous superiority fully as much as the racists who have co-opted this flag into their cause. It would appear that neither side wants to directly engage, or change their opinions through honest dialog.