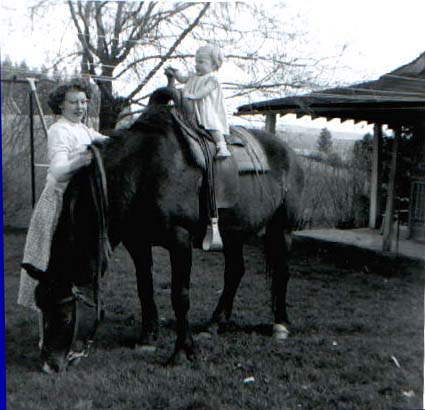 So glad to see you back in the (blogging) saddle! I have missed reading your posts on our equine friends. And, by the way, I'm still waiting (not so patiently) to see a book containing all such posts. Sending good karma your way. --Josh

Awesome information, thank you. I love reading up on how to do horses right in fiction.

Glad you're "back in the saddle" of blogging. :) I love your horse posts. My girl loves to wait till I just lift my foot toward the stirrup before she takes just...far...enough... of a step where I can no longer swing up on her.

Thanks for reading Chrysoula (awesome name, by the way!). I'm glad to help.

Trish, grrr! They can be so obnoxiously clever, can't they? And oh, yes, you're right about the sudden disasters. My family has many a story to tell about pack horses taking sudden objection, to the detriment of the saddle, the rigging, the packs, everything in them, nearby trees, and often the horse himself. When they get that stupid it is best to just stand out of the way of the wreck.

Another great post! You should do a panel on this stuff at a con, too! That would be awesome!

I've always wondered (maybe the topic of another post?) is whether or not these problems have existed throughout time or are modern horses just not as dead broke as the working horses of the past? I can't imagine a knight's horse, a colonial or pioneer era trapper's/hunter's horse (and pack horse), a rancher's horse, or a pony express horse acting this way. My uncle had five horses that mostly lived in the fields but we could grab any one of them at any time, throw a saddle on them, and hack around on the roads or trails with no problem (none of us had ever had a riding lesson and were not skilled equestrians). Were we just lucky or is that the modern pleasure horse is less well trained/more high strung?

What I describe in these posts is basic horse behavior. You can train it out of them to a certain extent but it is always there, and even the most well-broken horse can still surprise you. We kids used to catch our horses out of the pasture and ride all over creation bareback, but we still got dumped occasionally if something weird happened that overcame the training. I have a small and delightful book written by a an old-timer who used to pack mules into the Idaho gold fields way back in the way-back, and they regularly lost critters over cliffs on trails they had packed a hundred times. All it takes sometimes is for one animal to fall asleep, stumble, or panic to cause a problem. Sometimes a huge problem involving every horse or mule in sight. The older and more experienced the critter, the less likely he is to cause a problem, but they can all react to stimuli in ways that surprise you.