Here's to you, Jack 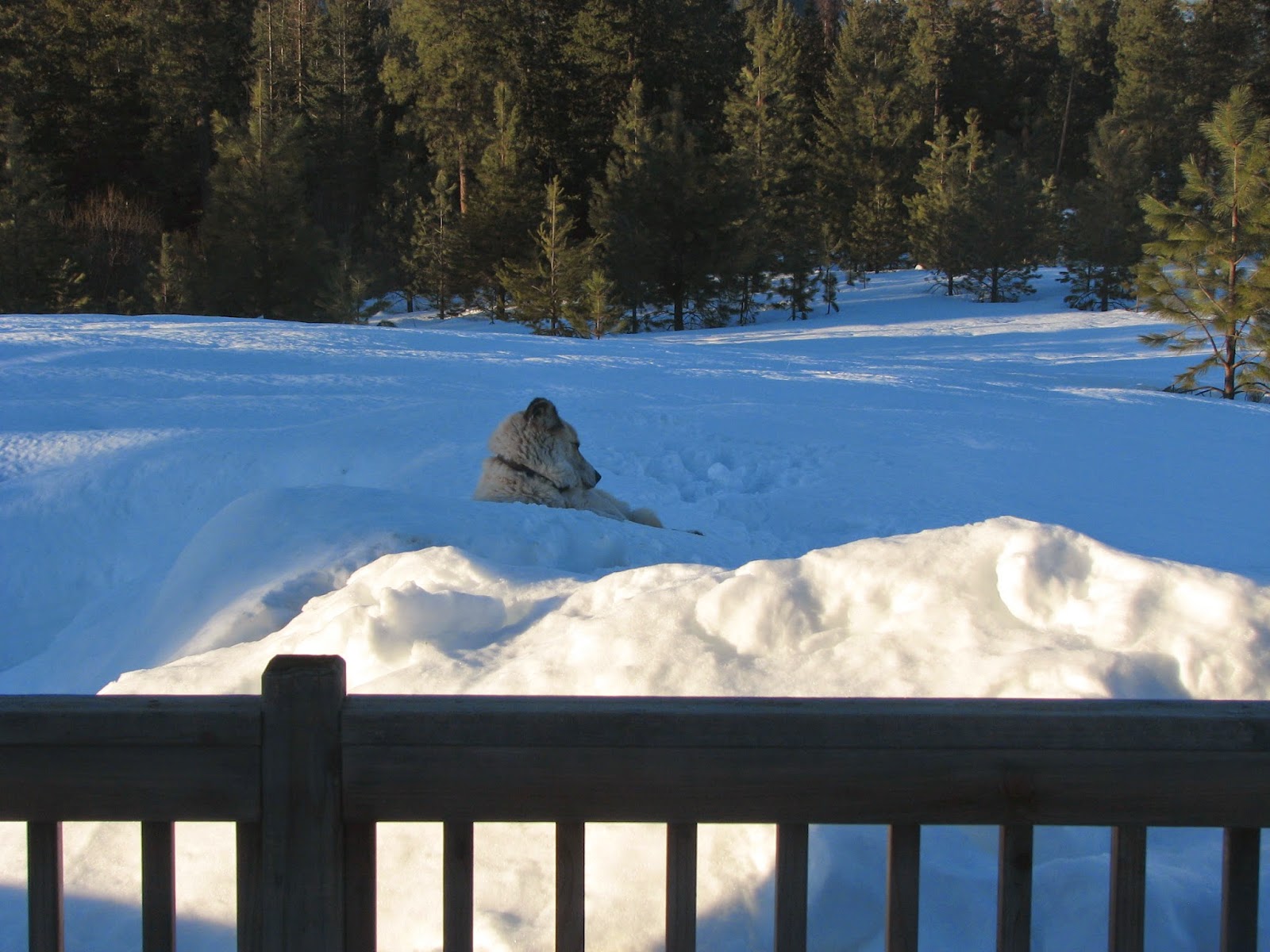 I have a ghost at my heels these days. It's big, white, furry, and its name is Jack. It haunts me every time I step out the back door, an invisible presence bounding out from under some tree, eagerly anticipating a long walk or a ride through the woods. It nudges me toward the dog food barrel at the barn...until I remember that ghosts don't eat. Even the neighbor's cat is lonesome, crying plaintively when I appear, because his big fuzzy living cat bed is no longer in its accustomed place.

I had to do the "kind" thing for my dog on Monday. He was 15, a giant mutt most probably a cross between a St. Bernard and a Great Pyrenees with who knows what else thrown in. He was a rescue whose original owner thought the solution to a litter of unwanted puppies was to toss the whole bunch out of a moving car. It permanently damaged Jack's hips, which got worse as he aged, until finally he could only hobble and it was painful to watch him trying to get up and down. Despite an appetite like a horse he was never fat, but of late...bed slats looked better. Even so, until this weekend he was still happy to see me, eager to try and go, indomitable in his enthusiasm for life. Sunday that changed. The spark had gone out of his eyes. The lift of his head, the tail wag, were acknowledgement, no more. Nice to see you, Mom. Sorry, can't get up. And I knew. He was telling me it was time. So, despite an increasingly rigid resistance on my part to yielding even one single day to Death, I bowed to the fact that he wasn't having fun anymore.

Misery should not be the default state of life.

Thus, the ghost at my heels, treading every well-worn path we walked together. He was a funny old dog, amusing and strange. He hated being in the house because it upset him to be confined, and he slept in snowbanks because he had so much hair. He could sleep through dynamite but one whiff of my scent on the wind brought him running (geez, Jack, do I really smell that bad?). He could never lift his leg to pee because of his hips, which must have frustrated him no end, but at least the tires on my truck were spared from being watered every day. He never entirely trusted anyone, even me, and his hearing was ever so selective. Call him, and he would most likely grin over his shoulder and slink farther out of reach. But stick to my heels? Oh, yes. Like glue.

This was the dog who spent years ambling along in the wake of my horse despite his limp, eagerly running to go with me whenever it looked remotely like I might be going for a walk or heading for the tack room. He drove me crazy barking at me when I sat on the back steps to put on my shoes, telling me to hurry up, hurry up already. This was the dog who was so amiable that ours was the neighborhood canine Kool-Aid house where all the mutts for a mile around came to socialize. This was also the dog who startled the stuffing out of me one day when the neighbor's pit bull got too aggressive and nipped at my coattails. Wow! Where did this Jack come from, the white knight charging down the hill to ram the pit bull, inserting himself forever thereafter between me and Diesel even though that pit eventually became my friend? Jack never forgave him. Ever.

And this was the dog who, when I had to be in the hospital and recuperating for a month without seeing him, all but crawled into my lap the first day he saw me and wouldn't get out. And, when I resumed short walks outside to try and recover my strength, he trotted ahead of me as usual--until he saw that I couldn't keep up. At which point he fell back beside me and very carefully matched his pace to mine, glued to my knee.

This from the dog who wouldn't let himself be touched. Only on his terms.

He romped into old age with his best bud, Shelly, the Rottweiler next door, the both of them so increasingly decrepit it was like watching the Harlem Globetrotters with canes and walkers. But they never lost their enthusiasm, smiling and bouncing (sort of) like puppies. He quit chasing cats when he figured out he could no longer keep up even a little bit, and became the tolerant older brother ignoring the tails brushed under his chin and the blob of warm gray fur curled up against his side. His criteria for barking at cars coming up the driveway was a mystery known only to him. As watchdog he was pretty much a bust--but all he had to do was saunter around the house into full view to put strangers back in their cars, fast. Like I said, he was big.

Aww, Jack was a good one!

Thanks, Maggie. He always looked like a scarecrow but he was tougher than any of us.