Horses in Fiction: The New Horse

I had a request for a post about working with a new or strange horse, which is a fantastic topic, actually. One of the very first articles I ever published was in Horse Illustrated years ago, dealing with a horse’s mindset. When you buy a new horse, most of the time you will have no idea where it’s been or what it really knows. A friend of mine was almost killed last year when her horse bolted with her unexpectedly. She and the horse ended up draped over fallen logs in a ravine. Turns out, it was not unusual behavior for that mare, but how was my friend supposed to know that? 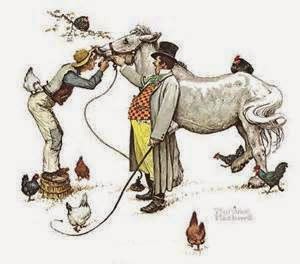 There is a reason that horse traders—and horse trades—have achieved a near-mythical reputation for dishonesty and underhanded dealings. Someone wanting to get rid of a problem beast is NOT going to tell you the truth, the whole truth, and nothing but the truth regarding said beastie’s history, health, or soundness.

The well-broken, docile equine, of course, will stand quietly while the green newbie rider tries to figure out which foot to put in the stirrup, crab-crawls up Horsey’s side, and flops into the saddle. The less forgiving horse may react in any number of ways, from leaping or sidling sideways to going straight up to backing away, or pitching a spectacular bucking fit. Newbie can get badly hurt, if not outright killed, simply by baffling his mount, jerking on his mouth, or giving him an inadvertent cue. The horse will respond as he has been taught, surprising his new rider. Hello, hospital.

The way any rider who is not completely arrogant and/or stupid approaches a strange horse is not the Hollywood leap-into-the-saddle-and-race-away cliché. It really does pay to make an effort to get acquainted with the beast. Back when horses were simply commodities, easily come by, not greatly valued except as living machines, I daresay that a good many folk skipped this step, beat the horse into submission, and rode away. To build a far more fruitful relationship, one in which the horse trusts you and doesn’t constantly balk, snort, or attempt to run away from any odd occurrence (or alternately attempt to bite, kick, crowd you against a wall, or turn its hindquarters to you in threat every time you go near it), approach him with confidence and a soft voice. Speak to him. Pat his nose. Stroke his neck. Pick up his hooves. Brush him all over. Be patient if he resists a little, and wait him out. Reassure him that you are nothing to fear. He doesn’t know you from Adam’s off ox. Depending on his prior treatment at the hands of humans, he could be flighty or calm, trusting or fearful, expecting good treatment, or expecting the worst. How he reacts to your approach will tell you a lot. If he cowers, lays his ears back, looks away from you, or backs away, you have a problem, at least temporarily. On the other hand, there is a scene in my novel The Mask of God where the hero is given a horse that walks right up to him and sniffs his hand because she expects to be treated well and be rewarded for her trust.

People who don’t care what the horse thinks flop the saddle onto its back without regard to the fact that it lands on living and sensitive flesh. They jam the bit in even if the horse is trying to cooperate, which of course just teaches the horse he’s going to get hurt no matter what he does, so why bother to cooperate? The best way to turn a horse sour is to constantly confuse him, hurt him, and fail his expectations.

Every horse is likely to respond differently to a rider’s cues. Squeezing with your legs or booting him with your heel are pretty standard to get him to go, but he may not understand your combination of leg and rein. Therefore, he might not canter or halt or move in the direction you wanted him to go, when you wanted him to do it. This can lead to awful battles between the frustrated horse and the frustrated rider. A good rider will understand that the horse is trying, sit quietly, ask nicely, and give him space to figure out what you want from him. I knew a woman who bought a horse that stopped on the long line every time it tightened up. She finally discovered he’d been a roping horse! He wasn’t defying her; he was doing just what he had been taught, which was to keep that line taut between himself and the “calf” on the other end. All that knowledge is embedded in the horse’s brain. They have associative memories, and they don’t forget.

A good way for your fictional heroes and villains to end up somewhere unexpected is to expect their new horse to act just like their old horse. Kind riders develop a decent relationship with their mounts. Indifferent riders try to force the horse to do what they want, whatever it takes, and blame the horse for not being as well trained as they expected, or defiant, or stupid.  The rider who takes that crucial few minutes to let the horse see him, smell him, hear his voice, and develop some trust that he won’t be hurt, will end up with a horse that will cross rivers willingly, stand in the face of danger, and jump where he cannot see, all because he trusts that his rider is not going to get him killed by doing so. A great many horses have been disappointed in this hope, but that is for another post.

There may be times your hero has to jump on a strange mount and go. For an experienced rider, this is usually not a big deal unless the horse is completely untrained or trained to something far different. A carriage horse may never have been ridden in its life, for instance. For a less experienced rider, this change of horse could be a prelude to disaster if the horse is at all sensitive. For wonderful plot quirks, however, try giving that horse a sore back (wonderful for inducing bucking) or hoof (he won’t make it far), an overly sensitive mouth (perfect for the sudden rear straight up), or special training (miscues galore!). A friend of mine had an old circus stallion that demanded to do tricks before he’d do anything else for the day, and the first time she casually lifted her lunge whip, he reared up—exactly as taught.

The possibilities for your remounts are endless, but it comes down to getting to know your new horse—or not bothering, and paying the price.