You know, I can only assume that most Hollywood directors who use horses are either so totally horse-clueless themselves, or else assume their audiences are so clueless, that they really don't care what stupidities they commit (I daresay this applies to more than horses). But honestly, if the script says "mare" ... why the &*#) can't you put a mare on screen?

The most egregious case of this I can recall offhand is the Hellbitch from Lonesome Dove, the horse ridden by Tommy Lee Jones' character. It was supposed to be a young mare, but it was a very nice gray ... gelding. Obviously so. The other night on Longmire, an otherwise really good show, the "mare" dashing across the prairie with dead body in tow looked suspiciously like a gelding. It could have been part of the saddle dangling on the off side in a strategic place. Or not. Given Hollywood's track record, let's just say I was really surprised when a character, Henry, referred to the horse as "she." 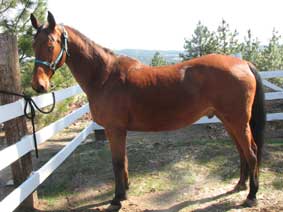 The sex of a strange horse is one of the first things a horseman looks at, and it's sort of hard to get wrong from most angles. Note that Beau's sex is pretty obvious in this picture, spotted right up there at the arch between his belly and his hind legs. I can often tell a mare at first glance even without looking for male equipment, though not always. There is something about the refinement of the head, sometimes the way she stands, a slight delicacy of her body, just super-subtle clues that we have here a female of the species. Now mares can be as clunky and graceless as any of their male counterparts, but sometimes...there is that twinkle. You just know.

I can sympathize, somewhat, with the Hollywood dilemma of using mares. They are notoriously nastier and harder to work with than geldings, who have lost most of their aggressiveness, don't usually care if it is a male or female standing next to them (unless the stud is aggressive or the mare in heat), and are just generally less aggravation. Unless, of course, you get one like Kalup, the herd boss who had to demonstrate it every single minute, stirring the rest up just for fun. Mares in heat can really be, uh... demonstrative, chummy, sometimes downright determined to get herself a fella, giving come-hithers to every male in her vicinity regardless of whether he can help her out or not. The rest of the time they can be as dependable and wonderful as you like. But. On a movie set, a mare in heat could definitely be an unneeded distraction. In the manner that all those dogs named Lassie were really males (something about shedding, I seem to recall), directors and their horse wranglers may opt for nice, quiet geldings instead of mares.

But in that case, couldn't you change the stinkin' script? Such a little thing. And we would love you for getting it right for once. Just sayin'.

I am working on the revision of my Fate's Arrow trilogy, the first of which, The Mask of God, comes out soon. The hero is given a very fine mare as a gift and rides her whenever he is not forced to ride a warhorse. It occurs to me that I have not had beautiful Azram come in heat anywhere in these books. Hmm. I wonder what slight mayhem I might cause with that? Some nice, well-timed kicking and striking, horsing down in the picket lines, a sharp nicker at a bad time? Oh, the possibilities....

I shall now go away and think about this. Expect changes!