If a Firedancer and Windrider Get Together...?

Wow, summer certainly slides by fast once it gets here. Between conventions and haying season, my time has been a bit crunched of late. We had a whole wonderful week of excellent weather in which I got the first half of my hay in, only to have the clouds and storms return and the rest got rained on. Sooo...now I get to look for a couple of tons that made it into the barn while the sun was shining. Heh. Now you know what lies behind that old horsey saw, "Make hay while the sun shines." It just isn't any good otherwise.

I do owe another Horses in Fiction post but this time I want to depart a little from the usual. I'm starting a blog tour today for the next month or so, and a lot of the interview questions have got me to thinking about what to share about my world of Metrenna and the characters who inhabit it. I am always afraid of giving spoilers that will ruin the reading experience, as I've never been one to flip to the end first (except for Harry Potter and the Order of the Phoenix, because I had a bet on as to who died. I won. :) ) It's kind of a fine line to walk between talking about the good stuff and giving away the whole plot. 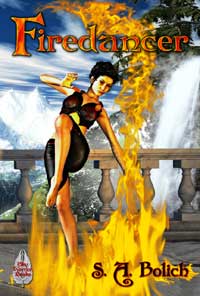 With that said, one thing I do think is fun to talk about is the idea of so many types of distinct magic-wielders in one world. There are four "talented" clans on Metrenna, each tasked with controlling one element: Fire, Water, Wind, and Earth. None of them can do what the others do, and common folk can't wield any of their powers. You are born to the Firedance or you're not, and that's just the end of it.

However (she said)! It appears that in all of time none of the clans has ever produced a Romeo and Juliet determined to marry across the clan divides, mostly because the clans just don't come together that much except in times of exceptional crisis. Well, they're in one now, and extraordinary circumstances make for extraordinary leaps in attitude. So, what would be the result of a Firedancer and a Watermaster getting together? Or a Windrider and a Delver, one born to the heights, one to the depths? Or a Firedancer and a Windrider, those two most dangerously mixed elements of fire and air? The possibilities sort of boggle the mind. Would the mix of talents produce something extraordinary in turn--or cancel each other out and you'd end up with a child unable to wield either of its parents' abilities? This, by the way, is not really a moot question...

I very much like the idea of incompatible magic wielded by people who are not inherently hostile to each other. What about you? Does it spark possibilities or seem to limit the world?

Check out my interview at The Seraphine Muse today, which not only gives some background on The Masters of the Elements series, but an exclusive sneak peek at Seaborn, the upcoming third book in the series. You can also hop out to Goodreads and sign up for a signed first edition print copy of Firedancer, or buy it outright at your favorite book outlet online.

And do leave your thoughts on love, magic, and the permutations thereof in the comments!
Posted by Works of S. A. Bolich at 4:04 PM 4 comments: