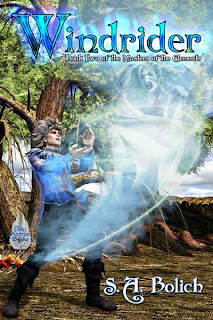 Ta ta dah! Sound the fanfare. Windrider is here! Be warned that this is a shameless plug for my second book. :) Horses in Fiction will resume on Friday.

Windrider, the sequel to Firedancer, is now available pretty much everywhere in ebook form, and I just this second finished the galleys for the print edition and sent them back to the publisher. You'll soon be able to obtain it in whatever form your heart desires.

Windrider continues the story begun in Firedancer, as our heroes find the mystery of the elementals deepening. Why are they rebelling against Earth Mother and the magic that has bound them for so long? What do they want? First Fire broke the bounds of the Firedance; now Wind's angry sister, the Hag, has begun a rampage through the inner plains of Metrenna. The Storm Council, the ruling elders of the Windrider clans, sends a summons to Annam Vale for Clan Heshth to leave their self-imposed exile and join the fight. For Sheshan ak'Kal, that means a painful parting from the peace he has only just found, and a return to much less pleasant places he has tried to forget. In one rebellious moment, he attracts the Hag's attention...and now she pursues him, keening a note only he can hear. For a Windrider who has lost his own song, the powerful windsong that connects him to Earth Mother and helps him bind the power of the winds, the lure of that note--and the awful, uncontrollable anger that goes with it--may prove fatal.

Come find out what it's like to weave living wind in your hands and hear the songs of storms. It's an inside look at another of the talented clans, and a steal at just $3.99. You can find it here:

There are undoubtedly other places you can obtain it, but these three cover pretty much every ebook format.

This was a difficult book to write but I like the way it came out. I hope you do, too. Enjoy!