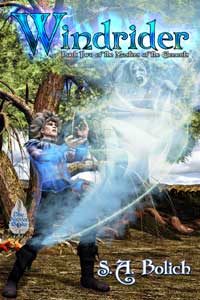 April has been so busy I got a big jolt today when the cover of Windrider arrived, reminding me that May is almost here, when the second book in the Masters of the Elements series will be released. Windrider takes up where Firedancer left off. Our heroes must get to the bottom of why Earth Mother's children, the living elements Fire, Water, and Wind, suddenly seem to be in rebellion against her, putting every living thing on Metrenna at risk. Fire is still running wild, and now Wind's angriest incarnation, the Hag, is rampaging through the central plains, a menace that is affecting the very weather. But when she develops an unhealthy interest in Sheshan ak'Kal, things get sticky very fast.

I have to admit this is kind of a cool cover. Sheshan is in rather deep trouble in this particular scene. As you can see, the Hag is not particularly happy with him at the moment!

It's not too late to get in on the Goodreads giveaway of Firedancer, the first book in the series. Sign up to win an autographed first edition and get caught up on the series before Windrider comes out next month. I'm told by readers and reviewers that you'll be glad you did. I, of course, am prejudiced. :)

Get a sneak peek at the first chapter of Windrider right here.
Posted by Works of S. A. Bolich at 8:20 PM

This is actually good to read content of this blog. A is very general and huge knowledgeable platform has been known by this blog. I in reality appreciate this blog to have such kind of educational knowledge. Equine Assisted Therapy