Horses in Fiction: No Hoof No Horse

Radcon was fun but left me with a serious case of con crud (rumor hath it that it was a norovirus. You fill in the details.) which has left me hors de combat this week. But, since the farrier was out yesterday, I had to drag myself out to hold horses for him anyway, which naturally put me on the topic of hooves.

While this is, of course, an unprovable assertion, I would guess that more horses have been lost to service from hoof ailments throughout history than any other cause. Xenophon wrote the first definitive tome on the horse 2400 years ago, which is kindly available from Project Gutenberg. Some of his advice is as cogent now as it was then. Seriously: no hoof, no horse, a Pony Club creed even today.

Indeed. Does anyone besides me cringe whenever I watch old Westerns where the horses are running flat out over some rocky hillside with the hero shooting back over his shoulder (never mind that he's never going to hit anything like that)? The potentials for broken legs, bowed tendons, and hoof damage never seem to occur to people unfamiliar with horses. Once again, the uninformed "horse as machine" mindset rears its ugly head and assumes that horses can do anything the rider wants them to do and just keep going like the Energizer bunny.

You can lose a horse to hoof ailments from:
And any number of other things. I've had horses pick up nails, rocks, and roofing screws. I've had one founder (more on that below). I've had quarter cracks from pastures that were too wet and horrendous chips from ground that was too hard. Last summer Pilot had a quarter crack (a vertical split that usually, but not always, occurs about a quarter of the way around the hoof) straight up the front that began growing hoof over it instead of new growth from above. This forced the whole hoof together so tight inside the shoe he went lame until the vet pulled it. He widened the crack significantly to allow growth and Pilot was fine. It's still growing out, by the way.)

Really rocky terrain is especially tough on horses because, being by evolution creatures of the steppes, their hooves are just not constructed to cling to hard surfaces like stone. The problem is compounded by the very shoes put on to save their feet from rocks. Metal horseshoes can be very slippery, and as noted in a previous post, they can compact snow against the hoof until it is nearly impossible for the horse to get traction. Medieval smiths used to leave the heads of the nails protruding a bit for traction (hence the term "riding roughshod"), which did nasty damage to enemies on the ground, and presumably, to other horses and even the poor beast wearing them, as horses can overstep and strike themselves with the rear hooves. 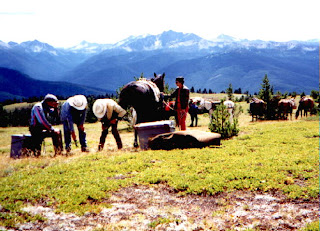 Losing a shoe means losing time, because letting your horse hobble on three can produce lameness on anything but soft ground. Ergo, your traveling party may look this like at some point, presuming the party actually wants to stick together and isn't being chased by bad guys. (Yes, my dad could nail a shoe on anywhere.)

Horseshoes as we know them (the nailed-on kind) were not invented at all until around 500-600 AD, so slapping shoes on your Roman or Greek nags is not going to cut it historically. Many horse cultures had some sort of leather strap-on boot, but those last about as well as you would expect, rawhide somewhat better. There are about a hundred ways you can shoe a horse to correct a problem, and a dozen more that will lame him temporarily or permanently. A lousy farrier can cripple a horse unintentionally and a good one on purpose if he really doesn't like the rider and doesn't care about the horse.

It takes an hour or less for a good, industrious farrier to put all four shoes on a horse if he is not actually creating the shoes from scratch on the forge. Like people's feet, horses' hooves fall roughly into standard sizes and modern horseshoes are mass manufactured and sold that way. The horseshoer/blacksmith/farrier/marshal (yes, marshal was originally a term for a guy who put shoes on horses) then hammers the thing around the anvil until it fits the actual shape of the hoof. Hot shoeing means he heats it first, slaps the hot shoe to the hoof (emitting a truly acrid stink and smoke) to see if it's flat and truly shaped, and then cools it off and nails it on. All this is preceded by a session with nippers and a file to trim off the excess growth, rough-shape the hoof, and file it flat so the horse does not end up walking unevenly on that bar of iron. Filing and trimming also keep the hoof at the proper angle to the coffin bone.

The coffin bone is critically important to hoof health. It is a needle-shaped thing pointing toward the toe at about the same angle as the front of the hoof slopes. When a horse "founders" (develops laminitis) from eating too rich food or hard use or illness, rush of blood into the liminae of the hoof often forces the coffin bone to turn downward toward a sole that has become too flat from internal pressure. This is agonizing for the horse, like walking with a knife jammed into his foot. Many times the horse has to be put down because the damage is too great and the likely return too little (Secretariat, Barbaro). Even if the very long healing time (a year or more to regrow a normal hoof) results in an actual sound horse, the poor beast is now susceptible to laminitis and may never stand up to hard conditions again.

Horses in constant use on tough campaigns on hard ground are far more likely to break down with hoof problems, and keeping enough horseshoes on hand was an issue for any cavalry element. True horsemen start a grooming session at the ground, checking the hoof first to see if there is anything in it that will preclude the ride. Even a small pebble can be a huge irritant when it gets stuck between the fleshy, arrowhead-shaped frog and the sole of the hoof, or gets caught under the shoe. Letting the poor animal hobble along like that for hours (say, in a pack string), is pretty much a guarantee the beast will be lame in the morning. Even if caught early, hooves can be bruised by stones and be sore, and form abscesses inside that take weeks or months to grow out. Sometimes the farrier or the vet gets to dig for them to relieve the pressure, like lancing a boil. Most times you won't know it's there until the horse goes lame, weeks after the injury. Then you get to spend a jolly half hour trying to figure out where he's sore.

Okay, that's the crash course in the two thousand things that can go wrong with your horse at ground level and keep your hero from getting where he's supposed to go on time. Be aware that all those exciting old Western movies were filmed in handy California and Arizona, which is not only why many people assume all the action in the Old West occurred in the desert, but why they assume everyone can ride like the Lone Ranger and nothing will ever happen to Silver. One presumes your heroes will be riding through more varied terrain, but mud can be as much your horse's enemy as those rocky hills.

Oh, by the way, here's a factoid that will really make you sound like an in-the-know horsey author: every dog ever born, even if it never laid eyes on a horse before, thinks horse hoof trimmings are candy. They will dash in under the farrier to snatch them and go away to contentedly chew and slobber. All I can say is...yuck.

Did I mention that Firedancer is now out in paperback? Woohoo! Check it out if you've a mind. And Windrider will be out this spring. Yeehah!
Posted by Works of S. A. Bolich at 4:12 PM

I love these blog posts; they are beautifully written and a great reminder of what life as a horsewoman was like when I was younger.

I was actually raised on a ranch in Colorado for many years, but I moved away at the age of seventeen and it has been over 20 years since I rode a horse. Thanks for putting me back in touch with those roots, and reminding me of the issues that are unique to living transportation. :)

Arinn, I'm so glad they bring back great memories. Thanks for reading.

Thank you for the kind words, Terri. See? I have enriched your life with a totally useless factoid. :) (But interesting!)