Horses in Fiction--What Writers Get Wrong 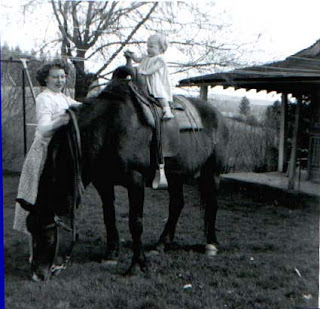 Where to start with this topic? As someone who grew up with horses (yes, that's me in the saddle, oh so long ago), horses have been a continuing part of my life and generally figure prominently in my fantasy fiction. I have done everything from teaching a horse to joust to packing into the wilderness for days at a time to 3-day eventing and dressage. I rode in a mounted drill team as a teenager, performing at rodeos and parades, and did 4-H and playdays and horse shows and everything in between. I rode bareback until I was big enough to hoist a saddle up onto my 16-hand mare. As an adult I was a DC and regional vice supervisor for the United States Pony Clubs, took up jumping, and still own 2 Thoroughbreds. I tell you this to establish the fact that I have indeed been there and done that when it comes to riding, horsemanship, and stable management and horse care. And why am I doing that? Because so much fantasy is set in pseudo-medieval worlds where horses are used--and because so many times the writer has clearly never touched a live horse and has no clue how to write them with any authenticity.

I have begun suggesting horse-related panels at conventions of late and I've been delighted to see several take me up on it. There are a lot of fantasy writers who do know their stuff when it comes to equines, like Patricia Briggs and Sara Mueller and C.J. Cherryh. Unfortunately, I see egregious Hollywood stereotypes creep into fantasy fiction all the time. Here are some of the worst:
I could go on and on and on, and likely will in future posts. I am thinking of shifting the focus of this blog to talk about the perils and potentials of horses as characters and props in fiction. Anyone want to weigh in on whether this is a good focus?

Wouldn't you know, my first published novel, Firedancer hasn't a horse in sight? Check it out anyway if you're curious about my writing. Until next time!

All contents (text and pictures) of this blog copyright S. A. Bolich. Use by permission only.
Posted by Works of S. A. Bolich at 10:19 AM

A wonderful and woefully much needed topic! As a fellow equestrian, I cringe when horses appear in many novels (fantasy is not the sole offender)and applaud when I see common sense and actually knowledgeable use in evidence.
Horses make wonderful characters...after all Black Beauty carried an entire book :)
Looking forward to the rest of your blog series.

Thank you, Eldheni. Gack, you can always tell the people who depend on Hollywood for their information, can't you?

I once wrote a first draft of an epic fantasy chapter deliberately using bicycles where I would eventually need horses, because I grok bicycles, and had not yet begun to research horses.

I tried riding lessons to remedy my ignorance. About when I was two lessons in, a friend who'd been an equestrian since she was a young child was in a riding accident. To avoid being thrown from a panicked horse, she threw herself, fracturing her skull and sinking into a weeklong coma. Her riding mentor, who saw the accident, praised her technique; had the horse thrown her, she would probably have died on the spot. My friend recovered, almost completely. Almost.

For my part, as a mother of young children and a newcomer to riding in my thirties, I concluded I had no business on a horse until my kids were teenagers at least. I'll have to use extensive research and the generous advice of friends who ride until then, and after.

It's rare to find sources that talk about horses in fantasy fiction that are actually knowledgeable about both. I'm so glad you mentioned this post on the Broad Universe listserv.

Your friend was very brave. I had a horse bolt on me once and it was the scariest few minutes I ever spent on the back of a horse. Had he not stopped when he met a fence he couldn't jump I'm not sure what would have happened. I'm ever so grateful I didn't have to find out.

Many people have no access to horses, and it should not be a total deal-killer if you want horses in your story. This is the reason I want to lend my lifetime of experience to other writers in this fashion. I will keep on, then, offering writer-focused assistance. Good on you for recognizing your limitations and responsibilities and hunting out a different means of getting what you need.

Sue, I don't have nearly the experience you do, but I rode as a hobby for most of my life and owned a Thoroughbred mare for a short while. I've written articles for my local Sisters in Crime newsletter on this subject. Characters are often tying their horses to things (tightly) by the reins, with no thought of what happens to the bridle or the horse's mouth if he shies. Characters who've never ridden are able to jump on a horse bareback and gallop away. In my critique group, a rider once had a guy who'd only been on a couple of U.S. trail rides happily join in a hunt across the English countryside. I asked, "So you're planning to kill him off?" She was astonished to find out that riding to a hunt requires skill and can be "bloody" dangerous!

Good stuff. Something that bothers me is the equally ill-informed writing about cows and goats in fantasy and dystopic fiction. Starving? Stumble across a goat or cow, and happy days are here again. Everybody knows how to butcher animals or milk them. Nope, no skills needed for that at all.

Thanks for the reminders! As a writer of historical fiction & Westerns, may I put in a word for donkeys & mules also?

I'm one of those who know nothing about horses, though to my credit I've never incorporated them in my fiction.

I have to mention my favorite horse scene in film, just for its ridiculousness. It's in True Lies, when Arnold is chasing the guy on a motorcycle with the police horse. I love how he gets the horse to go up the elevator, backs up for a brave leap from a high rooftop to an adjoining roof's pool...

And the horse skids to a stop and throws him. Seriously, what was he expecting?

Oh, yes, Eileen, tying a horse by the bridle is sort of a recipe for broken reins. I have stories (some of which involve my younger and much less wise self, alas). And I can recall being astonished as a 13-year-old when my friend, who had never been on a horse, couldn't seem to stick a slow trot. :)

Melissa, my dad acquired a love affair with mules late in life, so I've come to appreciate them more than I used to. And I don't think there's any equine cuter than a burro. There are a couple of wonderful books out there on the mule in the Old West. Do you have them? I can provide the titles if you want.

Michalea, indeed yes. At a panel at Miscon someone asked a question about riding distances per day (which of course is a complex question), and got hooted at (politely) by the whole panel when he assumed he would just be able to pot a deer every day for food and happily go on his way.

Faith, thanks for the giggle. I haven't seen True Lies, but it sounds like for once they got it right. Smart horse!

Thanks for the post. I look forward to reading more of your columns. Horses (and donkeys and mules and goats and cows) are a subject we can never have too much information about.

Jean Marie, thanks! And if you have specific questions, don't hesitate to ask. I'll do my best to answer them.

Quotes by my father -

"Around here we follow the Australian rule of riding first. Always keep the horse between you and the ground. After that, it's all negotiable."

Thanks so much for a much needed reality check! I will post haste check how my characters ride/feed/treat their horses, when they have them. I had a one week horse camp when in the Girl Scouts, but that was many moons ago and not really enough background to get it right.

LOL, Judy! That is the reason for the blog. Check back often for more tips.

This is a great post! I myself don't have any riding experience, and this kind of information is wonderful for cross-checking my fiction! :) Thanks so much for sharing, and I'm looking forward to future posts! :)

A couple of other writer mistakes with horses.
Mounted warriors creeping up silently on an encampment of folks who also have horses: when horses smell, hear, see--or think they experience any of these--other horses, they generally neigh. Loudly. To the point that "muffling their hooves" is pointless. And there's no effective way to get a horse to shut up.

Hoofbeats: on anything but rock or pavement, shod hooves make the same thudding sound as unshod hooves. While padding will help somewhat with the noise (but not the vibration), any padding material available in a primitive society will not last for more than a few hundred feet of galloping, or maybe a half-mile at a walk. To give you an idea, even many layers of duct tape are generally trashed within 24 hours by a horse standing in a stall.

Fibitz, you have an excellent point. Even my two trotting or cantering out to pasture (over grass) get my attention every time, and you can hear them clearly a quarter mile away. Passing cavalry was audible for a *long* way. And nothing gets a horseman's heart started quite so fast as the sound of hooves under the bedroom window in the middle of the night!

Excellent post! Thanks a lot for taking the trouble to post these questions. Since a lot of my family ride, I already knew a fair bit of this list, but the section on grazing was immensely illuminating.

*these observations, rather; excuse me, I'm extremely tired right now.