Horses in Fiction: Making Your Horse a Character

As promised, it's time to talk about how to really entwine your fictional horses into your story as genuine characters in their own right. This does not mean they need to talk, act human, or be anything but what they are--equine critters with their own instincts, needs, desires, and habits.

There has been a lively discussion over at Broad Universe of late, sparked by this blog, about taking fantasy horses into new territory such as making them carnivorous. That would really leave the realm of being an equine, so I am sticking here to real horses, or at least, to creatures that act like horses.

Real horse characters need to act "real." Imagine that. As much as we long to be able to talk to our beasts and have them talk to us (Damn it, where does your leg really hurt??), that's only going to happen in fantasy, and then you had better have a really good evolutionary pattern for giving your world a horse with such abilities. Or else, really really potent magic.

Every horse is an individual. Some are bold, some are timid, some aggressive, some curious. Depending on the situation, they can be all of the above. They are herd animals; they don't like being separated from other equines and will stand as close to the ones they can see as they can, even if those horses are two pastures over. They are not predators, but prey, and nature equipped them with speed to get away from danger. Thus they will jump and turn away from an unexpected threat, and often bolt in panic, or at least take two or three big jumps before the rider can regain control. This often puts said rider on the ground, entailing lots of plot mayhem.

Horses need to graze constantly by nature, so they are always thinking about food. They will poop on the fly but must stop to urinate. Their hides itch when shedding winter or summer hair or after you've unsaddled, so the first thing they want to do is roll. Sometimes they won't wait for you to get off. That bridle is itchy, man! They will rub on anything to relieve that itch, including their own front leg, a post, or you. I used to hold my hand out, palm flat, to Kalup (described below) and he would do the rest. A horse's head is mostly bone, and it's hard, so a persistent and ill-mannered nag can do damage in his single-minded quest for relief. 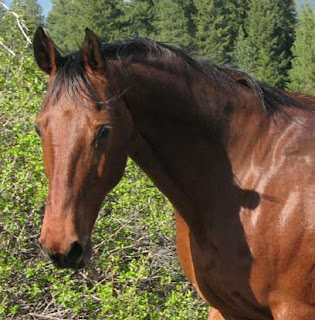 A horseman can tell a horse's mood instantly. Really. Horsey body language shows up most clearly in:
As with reading human body language, the writer can incorporate all of this onto the horses in the story to indicate one that is about to blow up, a friendly creature, or one in pain who must be taken care of before the group can get on with the day.

To illustrate how different horses can be, let me "show" you some horses I have personally known, loved, and occasionally sworn at with great feeling:
Once again, I could run on for days, but hopefully this gives a little foundation for fleshing out your horsey "characters" without making them human. They're not, and they're always going to act like horses, even if they can talk. It's instinct, and you can't take that out and still have a horse.

Do check out my novel Firedancer if you get the chance.

All content and pictures on this site copyright 2011 S. A. Bolich. Please use by permission only.
Posted by Works of S. A. Bolich at 5:14 PM

Sharing this with my horse oriented friends.

You should parlay these posts into a "horses for writers" book. I think there would be a lot of interest.

Michalea, funny you should say that. A friend and I actually did begin such a book years ago, entitled "The Horse Book for Writers and Readers". We have not moved it forward. Maybe we should!

Another thing I've seen writers do is grossly exaggerate the horses their characters are riding (in non-fantasy). It's always an 18-hand-high Thoroughbred stallion, which actually would be a pretty rare creature--and not likely to show up at a riding stable! Also, people have herd the term "wild stallion" so often that they think a "stallion" is a wild horse--of either gender. Whew!

Absolutely true, Eileen. In fact, I am working on a post somewhat along those lines, about how there's just never an ugly horse in Hollywood and what you were more likely to encounter historically. I had forgotten about the "wild stallion" schtick but you're so right.

Horses for Writing Dummies? How could you go wrong? :-)

Another good post, Sue! :) Another thing I wanted to add is that some of these also vary on the horse's personality. One of them that stands out to me is the lips curling. I've been told stallions/geldings do this a lot, but so does my mare whenever any new human is presented to her. It's not that she's angry/upset (though she does it then, too... particularly if she's not happy about a strong scent), she just wants to know each scent. One particularly mischievous mustang at the rescue would do that whenever she was amused... creating that "laughing" face people usually associate with the curled lips. (She was also a fiddler and most every volunteer's first reminder of why you double latch every door.) Another fun tail body language is when they lift it to show off or are indulging in an "OMG - yay!" canter. (Calico Silver always does this when I bring her outside to graze or exercise after a few days of crappy weather cooping her up.)

It's so funny to see that lip going, and oh, yes, the tail! Kalup actually got his name from an old Pennsylvania Dutch saying: "Head up, tail up, Kalup" (though I've also heard it Halup). Prancy, prancy, that was him, strut, strut strut with that tail up, which had a beautiful natural carriage anyway because he was a Saddlebred. One thing I didn't mention is the horse talking to you and all the ways they can communicate, from snorting down that long nose to eager "huh huh huh" at feeding time to angry squalling and deafening nickers.

It's so fun to hear from other horse people!