For something a bit different today, and just in time for Halloween, which, yes, I confess is a favorite holiday of mine, here is award-winning horror author Karina Fabian talking about her life as a full-time writer. Karina's latest offering is Neeta Lyffe Zombie Exterminator, and if we know Karina, it is going to be a fast-paced romp. What better stress reliever could there be than whacking zombies in the near future...that might just be coming? 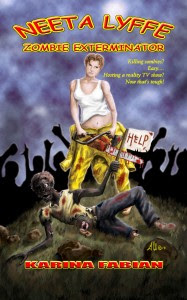 When I first dropped writing nonfiction to concentrate on my fiction in 2003, the thought was that I'd free up some time and cut down on my stress because I wouldn't be dealing with deadlines, finding markets, etc. to the degree that I would when writing novels. Eight years later, I can tell you I was so naïve!

Writing fiction has proven to be a greater commitment than magazine writing ever was. Now, I have to keep a regular writing schedule on my novel, work on the pitch materials for conferences or queries to agents and publishers, edit books that are already written and work with editors for those accepted, and make promotional materials for those already published. Add to that book tours, signings, conferences, chatting up bookstores and readers and all the other publicity stuff you do to draw attention to your work in this flooded market, and it's a 40-hour job.

The worst of it for me is that now that I've given myself over to my muse, the ideas won't stop! I have written two and a half books this year and am starting a fourth while I wait on critical information I need for the third (even with fiction, I still need sources!). I'm working on collaboration with my very patient friend, and have another that I need to revise. Nonetheless, my brain is processing three more novels, my computer holds the notes for a couple more on top of that, and in addition to that are others that are ideas or suggestions, but are not much more than a "I'd like to write…" I'd like to clone myself now, please!

The upside is, I adore what I do. I am excited every morning for what my imagination will bring. Even when I'm overwhelmed by the amount of stuff I have to do, each task brings its own energy--and getting them done is always satisfying. I often have to remind myself to prioritize and relax, but there's nothing better for your health than loving your job. And for me, writing novels is the best job in the world.

And this is how Karina entertains herself all day:

By the 2040s, the shambling dead have become and international problem. While governments and special interest groups vie for the most environmentally-friendly way to rid the world of zombies, a new breed of exterminator has risen: The Zombie Exterminator. When zombie exterminator Neeta Lyffe gets sued because a zombie she set afire stumbles onto a lawyer's back porch, she needs money, fast. So she agrees to train apprentice exterminators in a reality TV show that makes Survivor look like a game of tag. But that's nothing compared to having to deal with crazy directors, bickering contestants and paparazzi. Can she keep her ratings up, her bills paid and her apprentices alive and still keep her sanity?

The workout room had a weights set and an elliptical in one corner, but Neeta ignored them. She needed more vigorous exercise than that if she wanted to burn off her emotional funk.

None of the plebes had done the routine she'd just set for herself. It didn't really reflect the reality of zombie movements, either. Although the crew had designed the targets to look much like actual undead, they moved too quickly, changed direction too suddenly, lunged and retreated in ways zombies couldn't imitate. They zigged and zaggged, dropped from the ceiling to zoom back up, flung themselves from the ground to trip the unwary. For once, this wasn't about training.

Neeta steeled herself, found an opening and dove in with a roar. She swung high, tagging the first zombie with the edge of her blade just as it got within her reach.

This was about reflexes,

She jumped over the arm that sprung up in front of her, doing the splits as she brought down her chainsaw to slice the hand off at the wrist.

She spun a full circle, moving the saw in a sine wave. She took one target out at the knees, sliced another sideways across the chest, beheaded a third.

…about moving beyond thought and planning and negotiations with writers and directors and people who cared more for ratings than lives,

She lunged, spun, kicked and swung, her battle cries a perfect accompaniment to the pounding music.

A buzzer sounded, and the lights brightened and steadied. The targets stopped their frenetic motions and presented themselves for her to examine. She dropped the saw where she stood and braced her hands against her knees to catch her breath. Her arms felt like lead. A good feeling. She moved among the grimacing targets, noting the strikes that would have severed limbs, the ones that would have beheaded... When she came to the long-haired one with the pot belly, she gave a feral grin.

She's landed the blade in perfect position to slice Dave's manic smile right off his face.

From zombie exterminators to dragon detectives to nuns in space, Karina Fabian's universes make readers laugh, cry and think. Winner of the 2007 EPPIE Award for best sci-fi and the 2010 INDIE Award for best fantasy, she lets her characters take her where they will and is never disappointed. Karina Fabian is married to Colonel Robert Fabian. They and their four kids call home wherever the Air Force sends them. Learn more at www.fabianspace.com

Thanks for hosting me today, Sue!